Coming from Whitehorse on the Alaska Hwy;

Then Follow the directions that will be posted on signs to the parking lot.

at 6pm for registration.

All on unpowered wheels (except canicross - unpowered feet), and the dogs must remain attached to you at all times (even when 4 off them have hauled you off your bike and you're bouncing off the trees down the trail - quick release? What's that?). Helmets mandatory, body armour can be quite useful.

Thanks again to YUKON BREWING, and also First Mate Dog Food, and not forgetting the most excellent gift cards for most excellent foods from YUKON MEAT & SAUSAGE, The Deli at the last race!

YUKON GRAIN FARM LOCALLY GROWN STRAW, $7 A BALE AT THE GRAIN FARM, Just off the Mayo Rd before Lake Labarge 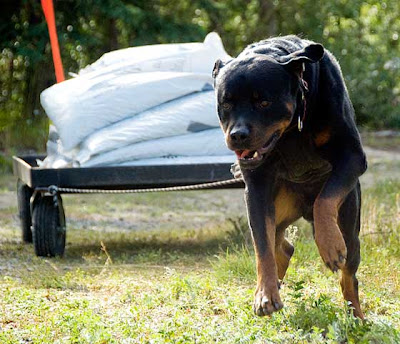 Whitehorse Star photographer Jon Russel captures Puck in mid-stride hauling 700lb to the finish line!
All the results are at DPSAY.wordpress.com, the link is to the right there - look right and scroll down a bit. Great turnout, good to see new faces and new dogs, and I learn it isn't necessarily a good idea to stroll past unknown dogs carrying a shovel (I was carrying the shovel, not the dog) - they can misinterpret my intention, which was to walk past! Still, no lasting damage.
Amil's rocket dog Grizzly vied with Heather's tall husky Cash in the lightweight freightpull, after a few episodes of "what's round the back of this trolley anyway?" Cash came through and made a perfect 3rd round pull to take lightweight champ and 3 bags of Firstmate Extreme dog food (good to his name - saved some "cash"). The mediumweights was a Snowpigs derby with up and coming 3.5 year old (going on 6 months) Puck at 98lb taking on oldster (old? OLD? I'm 8.5 years, I'm not old, and I can still throw that upstart on his back when he gets too pesky) Asha (89lb). Vying against each other with Asha's looks varying from bored, to "do I really have to do this?", to Puck's 10 second nonchalent sit at the start of the 700lb pull, then "oh, yes, you want me to pull this? well you should have said" and pull he did. Before we ran out of bags, Jon called it a day at 700lb each (some racers were muttering "get a move on, it'll be dark soon" from the bleachers anyway).
Then it was off to the races, ironically on one of the warmest evenings all summer. Sky High "Kennel Slave" Adam still hasn't got enough money to buy a shirt and ran topless, splashing sweat along the trail in the Canicross, whilst Grizzly's antics in the Freight Pull didn;t slow him down as he tore down the 1 mile to win with Amil Dupuis-Rossi, from almost-but-not-quite-pet dog Forrest and Deb Knight in second. The hairpin turn at the half mile caused some amusement (for Mike Simon on volunteer duty, at least).
Darryl Sheepway started to reprise last season's victories with a convincing win in the multiple dog 2 mile, with 2, 3, and 4 finishing within 5 seconds of each other, but at least 13 seconds adrift of Darryl. Jon, finishing 4th, and 2 seconds behind Alexandra Rocket claims it was due to him being on a scooter - well get on your bike then!
Then everyone retired to the BBQ, food, and wine tasting (yes it is true, DPSAY dog people are really quite refined), kindly hosted and run by Lee and Jim on their deck to share in the glory and prizes from CADENCE CYCLE, with supporting prizes from Muktuk Adventures, Aurora Booties, and Icy Waters Ltd.
And then it was all over...time to go home, and get training for the Aug 14th race at Alexandra Rochats, racing for Yukon Meat and Sausages unbeatable meat!
Many thanks to Lee and Jim for hosting, Darryl & Jon for organising, Mike and Jessica Simon (timing, coures volunteers) and the inimitable (you sure you know what that means?) Gene Ennis as Race Marshall - and you, for turning out with your dogs and making it happen,
Posted by cool dogs at 10:29 PM No comments:

and just a reminder - join DPSAY and race for just $10, and then just $5 for another race on the same day; or simply race as a non-member at $15 per race.
See you all there, bring good stuff for the Pot-luck BBQ!!
Posted by cool dogs at 10:56 AM No comments:

Sponsor of tomorrow's Freight Pull, First Mate, have made their Extreme 36% Protein/28% Fat diet available at $39/40lb bag delivered to Icy Waters Ltd. Jon is taking orders now for a mid-late Sept delivery - email grizzlysnowpigs@gmail.com for more details.
Or come on out to the Cadence Cycle Hot Hounds race on Sunday and win some at the Freightpull!
Posted by cool dogs at 9:35 AM No comments:

5pm Sunday 31st July, at Lee Kirkpatrick and Jim Hajash's Drag n Fly kennel, km 3, Old Alaska Highway - we have our first Hot Hounds Dryland Races of the summer (really? summer's still here? thought we were in fall from the feel of it).
Startlingly magnificent prizes will be up for grabs, from Cadence Cycle on Wood Street (get all your cycle stuff there, they've supported Hot Hounds for all 5 seasons!) for places 1st-3rd in our 4 races:
1 mile 1 sled dog - using unpowered wheels (bike or scooter usually)
1 mile 1 pet dog - using unpowered wheels
2 mile 2-4 sled dog - (4 dogs are for the more adventurous among us - enjoy) - unpowered wheels again
1 mile 1 dog Canicross - using powered human legs ie running
And to begin, we'll have the First Mate Freightpull:
light 0-60lb, medium 61-100lb, and heavyweight 101lb + dogs compete in their category to pull the heaviest load 16' on a trolley generously donated for the occasion by Grizzly Pigs Farm. Last dog pulling is that categories' champion. Prizes are 3 bags of First Mate for 1st; 2 for 2nd, and 1 for 3rd.
And we'll finish up with a pot luck BBQ - so bring something to eat, drink and share, and enjoy the post race atmosphere, swop accounts of terrible passing, and show off assorted bruises and grazes (nah, only joking; no you're not, this is the bonebreaker trail; shhh, don't remind them). It 's all perfectly safe, with helmets mandatory, body armour recomended, and a detailed disclaimer you need to sign before you go anywhere near that gravelled trail.
Remember, DPSAY Hot Hounds.....where all the cool dogs go
Posted by cool dogs at 9:59 PM No comments:

The July Hot Hounds event will again be held at Drag n Fly Kennel - home of the infamous "bone-breaker" gravelled trail, and the unforgettable "Are you arresting ME?" incident when a lone RCMP officer attempted to grab Ms S Rogan for daring to drink a can of Superstore's potent 0.5% "lager" at the roadside, and was then politely asked if he really was going to fit about 30 mushers, and their dogs in his cruiser...anyway to the important future event -
FIRST MATE EXTREME have AGAIN sponsored the Yukon's unique and one and only:
SUMMER FREIGHT PULL!!
18 bags of FM up for grabs across the 3 categories, get 'em out there training pulling tyres!!
Upstart Pretender Puck will be challenging Asha for the Mediumweight title...or will he....who else is out there?
Stay tuned as the July race gets set up...looking like Sunday 3rd or Sunday 24th with lotsa luverly Omega 3 and Vitamin D rich Arctic Charr from Icy Waters Ltd to race over (well win, it'll get a bit gravelly if we race over it...)
Could've got the sled back out up here yesterday.....
Posted by cool dogs at 10:40 PM No comments:

On a surprisingly variably cool and warm day, 16 Twister teams, 2 slightly crazed Open Teams*, 3 Kid's Teams and 2 Pet Dog teams turned out for the season finale - one of the best turnouts this season.
(*because the trail was very hard and quite fast enough without hooking 9 or 16 dogs up to featherweight sleds - but hats off to those two, they did it, and fast!)
Results will be posted on the DPSAY site , click over on the right there, but this race sealed the League results:
Kid's League leader Seth Carey ran his race to complete 3 victories, gaining 30 points overall, the League Crown (ok, title) and $125 from Yukon Brewing: Well done Seth! See you next season!
Asha had competition from Tiramasu, and whilst canicrossing vs skijoring appeared a one sided race, it was interesting to see Jon slogging up the the hills, slowly catching Pippa, and then fascinating to see Pippa take off on the downhills! Still 2nd = 8 pts, and for a total of 36 pts Asha takes the Pet Dog League and $125 from Yukon Brewing for Jon.
The Twister! Aha, Stefan with a 6 point lead gallantly volunteered as Race Marshall, and Darryl came so close - finishing 3rd he equalled Stefan's 22 points (the first time we've had a tie for the Champ's position), however in the case of a tie the winner is the one with the fastest time, in any race over the season sooo:
1 - League Champ and holder of the famous Copper Trophy for year and $250 from Yukon Brewing - Stefan Wackerhagen!!! 22 points
2 - Darryl Sheepway, 22 points, $200
3 - Jon Lucas, 14 points, $150
4 - Fabian Shmitz, 12 points, $100
5 - Claudia Wickert, 8 points, $50
Many thanks to all the sponsors, volunteers, and organisers that made this season possible! see you all in oh er 6 weeks for the Dryland season!!!! Time for wheels, running with dogs never ends!!
Posted by cool dogs at 8:16 PM No comments: